This document contains a detailed summary and description of the deer-vehicle crash (DVC) problem between 1993 and 2003 in the states of Illinois, Iowa, Michigan, Minnesota, and Wisconsin. Several different types of DVC-related data were obtained from the Department of Transportation, Department of Public Safety and/or the Department of Natural Resources in each of these states. More specifically, the University of Wisconsin Deer-Vehicle Crash Information Clearinghouse (DVCIC) were provided the annual total number of police reported crashes, vehicle-miles-traveled, reported DVCs or animal-vehicle crashes (AVCs) (from Iowa), and DVC/AVC injuries and fatalities. Annual deer population estimates were also obtained from four states and deer carcass removal numbers from three. All of these DVC- or AVC-related data were also combined, where appropriate, to summarize and describe this problem for the Upper Midwest region of the United States. Overall, this document describes the DVC/AVC problem in more detail than generally accomplished by individual states within the United States. A regional summary of this issue has not been attempted in the past.

The proper evaluation and combination of DVC- or AVC-related data requires a complete understanding of the defining criteria for the data used. These criteria can change from year to year and be different from state to state. The criteria are noted, as appropriate, in the figures, tables, and text of this document. The criteria of primary interest include the minimum property damage reporting thresholds year to year in each state, the type of data collected (DVCs or AVCs), how much of the state is summarized within the data (e.g., does it include large cities), and what time period do the deer population estimates represent (pre-hunt or post-hunt). In some cases the data for a particular year in a particular state were also questionable and not used. These reductions in data are noted where appropriate. The general trends in the DVC/AVC data collected from each state and in the region are described in this executive summary. Specific DVC or AVC details about each state and the region can be found in their individual data descriptions, figures, and summaries provided throughout the body of this document. The data used to produce the figures in this report are included in Appendices A-1 to A-6.

Overall, the total number of crashes reported in the Upper Midwest region from 1993 to 2003 has remained relatively stable. Several of the states in the region have experienced a stable or increased level of reported crashes and Iowa’s total has generally decreased. The AVMT has increased steadily in all five states and regionally from 1993 to 2003.

The percentage of reported crashes represented by DVCs or AVCs has generally increased or remained stable in each of the five Upper Midwest states considered. In Illinois, Iowa, and Michigan this percentage has increased, but it has been relatively stable in Wisconsin. In Minnesota the percentage of all crashes represented by DVCs decreased from 1993 to 1996 and then increased. Regionally, the DVC/AVC percentage increased from 9.2 to 10.9 percent between 1993 and 2002 (the last year when data from all five states were available). This change represents an increase of approximately 18.5 percent in 10 years.

Four states (Iowa, Michigan, Minnesota, and Wisconsin) in the region provided annual deer population estimates, but only three states (Iowa, Minnesota, and Wisconsin) provided data they had collected on their annual carcass removal activities. The annual deer population estimates in three states increased from 1993 to 2003, but the estimates completed in Michigan increased from 1993 to 1995 and then decreased. Regionally, the annual deer population estimates have been relatively cyclical. An increase in this regional measure is shown from 1993 to 1995, a decrease from 1995 to 1997, and then an increase until about 2000 before an apparent decrease. The annual number of carcasses removed from three of the states, on the other hand, has increased from 1993 to 1996 but remained relatively stable from that point. This pattern could be the result of many factors, including program funding and how the carcass removal data was collected and recorded. Each year there are always more carcasses removed (salvageable and unsalvageable) than DVCs/AVCs officially reported. The annual ratio of carcasses to reported DVCs/AVCs ranged from about 1.4 to 1.6 in Iowa, 1.7 to 2.6 in Minnesota, and 1.6 to 2.3 in Wisconsin. The average ratio regionally was about 2.0.

There have been several attempts at a national quantification of the DVC or AVC problem. It has been estimated, for example, that over one million DVCs occur each year in the United States and these collisions cost the traveling public more than a billion dollars (1). The basis of this estimate appears to be a survey in which the responses were based on police-reported DVC data, roadside carcass data, or some combination of the two. These two datasets can have different defining criteria and their combination to estimate the problem in the United States may not be appropriate. It has also been estimated that the percentage of total crashes represented by AVCs increased from 4.7 percent in 1985 to 8.2 percent in 1991 (8). Between 1994 and 2004 the number of annual AVC fatalities in the United States also increased from 131 (in 1994) to 204 (in 2004), representing a 56 percent increase (11). Finally, the United States Centers for Disease Control and Prevention (CDC) estimated that in 2001 and 2002 AVCs resulted in 26,647 people being non-fatally injured and visiting the hospital.

The recommendations included in the last section of this document focus on improvements in the collection and combination of DVC or AVC data. It is recommended, for example, that the defining criteria and type of DVC/AVC-related data be documented for the entire United States. The time period evaluated should also be expanded to include annual data from pre-1993 and post-2003. It is also recommended that the bureaus or agencies that are collecting DVC/AVC-related data in each state be identified and that one person be assigned the task of obtaining and/or summarizing these data each year. A multi-disciplinary and public-private agency committee or coalition could also be created to consistently educate the driving public about this subject. Finally, it is also recommended that the value, collection, and use of carcass removal data and the police-report details of DVCs/AVCs be investigated further. Among other things, more specific information about carcass removal activities could change how the magnitude of the DVC/AVC problem is defined and where DVC/AVC countermeasures are considered. In addition, a closer examination of DVC/AVC reports may better explain the trends seen in this report. This report concludes with a recommendation that the type and origin of the DVC/AVC-related data used in papers and articles on this subject generally need to be more properly defined in the future. Confusion on this point, in some cases, has limited the value of DVC/AVC-related documents in the past.

10-Year Report: This report used only a portion of the data available from Illinois. To view all Illinois data, including the most recent data available, please visit the Animal-Vehicle Crash Data page.

Overall, from 2000 to 2003, DVCs represented approximately 5.2 percent of all the crashes reported and summarized in Illinois. The total number of DVCs has also increased during the last decade. An evaluation of the Illinois DVC-related data showed the following general patterns: 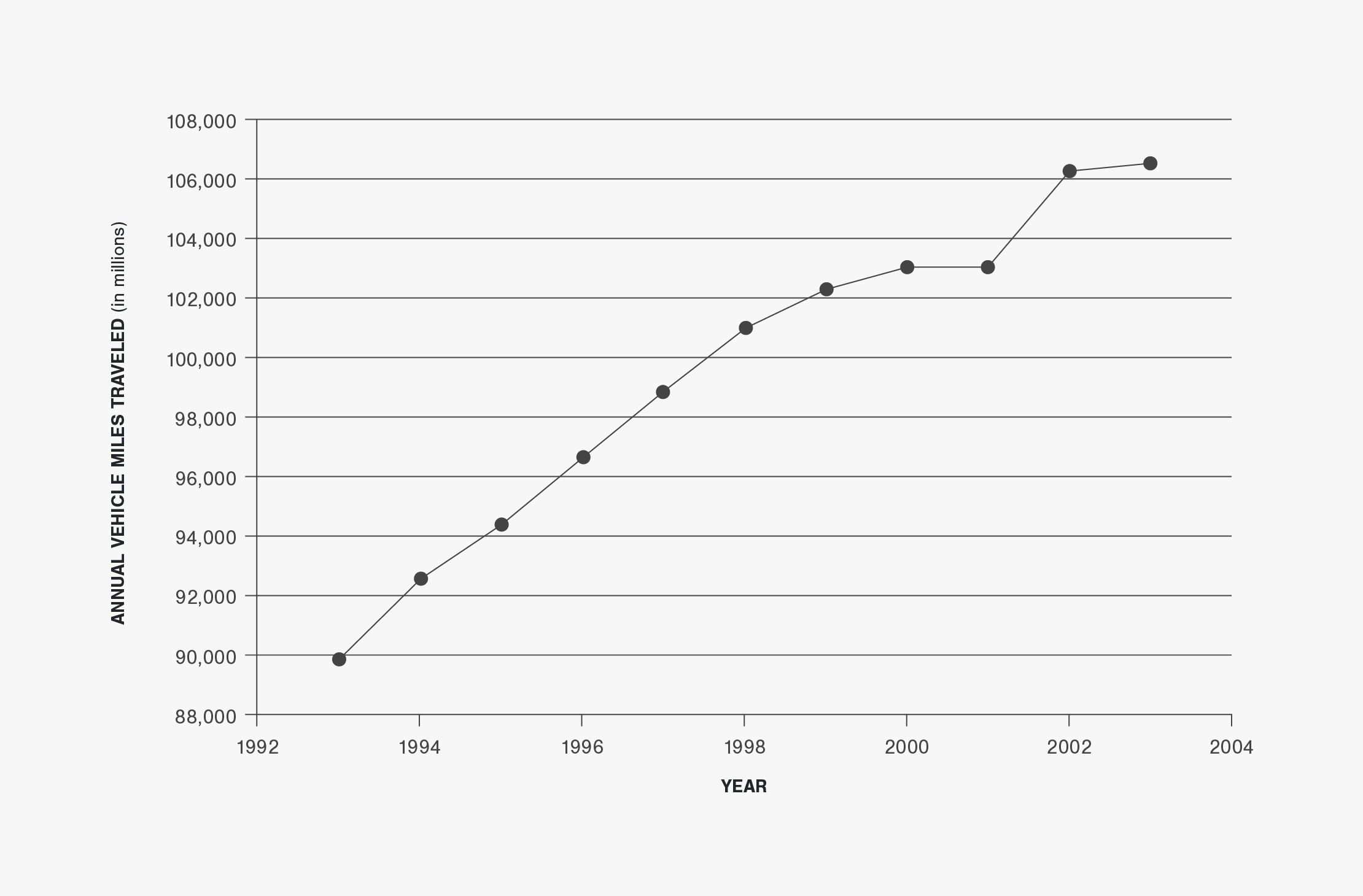 a Data from 1996 excluded due to inconsistent data summary during that year.
b Crash data from 1996 to 1999 does not include non-fatal crashes reported within the City of Chicago.

10-Year Report: This report used only a portion of the data available from Iowa. To view all Iowa data, including the most recent data available, please visit the Animal-Vehicle Crash Data page.

From 1993 to 2000 the average percentage of all crashes reported in Iowa that were AVCs was approximately 11.6 percent. However, the annual total number of reported AVCs increased from 1993 to 1996, decreased until 2000, and then increased from there to 2002/2003. An evaluation of the Iowa AVC-related data showed the following general patterns: 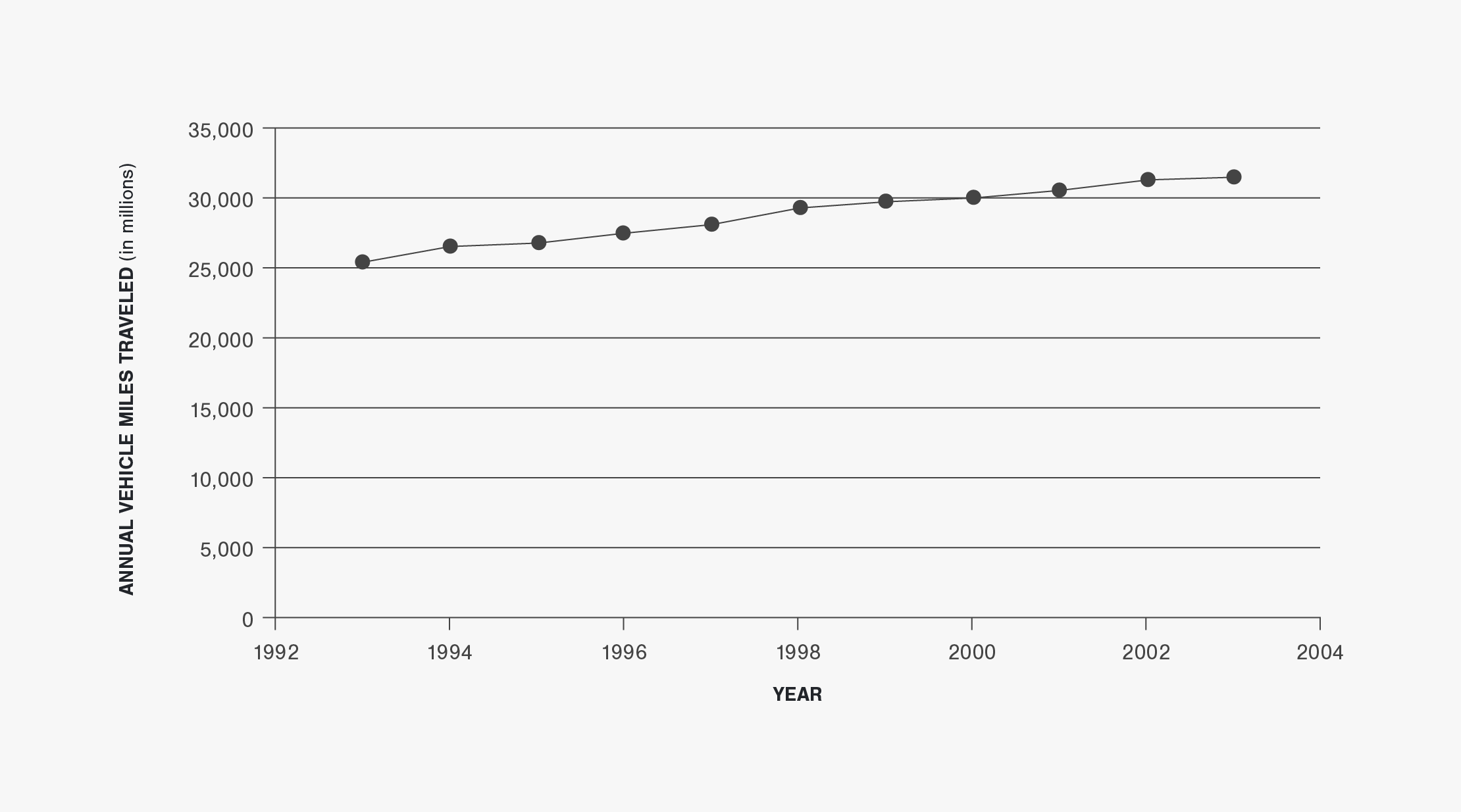 a Minimum property damage reporting threshold changed from $500 to $1,000 in mid-1997.
b 2001 crash data not used in report due to change in safety data management procedures during that year.

10-Year Report: This report used only a portion of the data available from Michigan. To view all Michigan data, including the most recent data available, please visit the Animal-Vehicle Crash Data page.

From 1993 to 2003 the average percentage of all crashes reported in Michigan that were DVCs was approximately 15.6 percent. This is the largest percentage of DVCs found in the five states considered in this report. An evaluation of the Michigan DVC-related data showed the following general patterns: 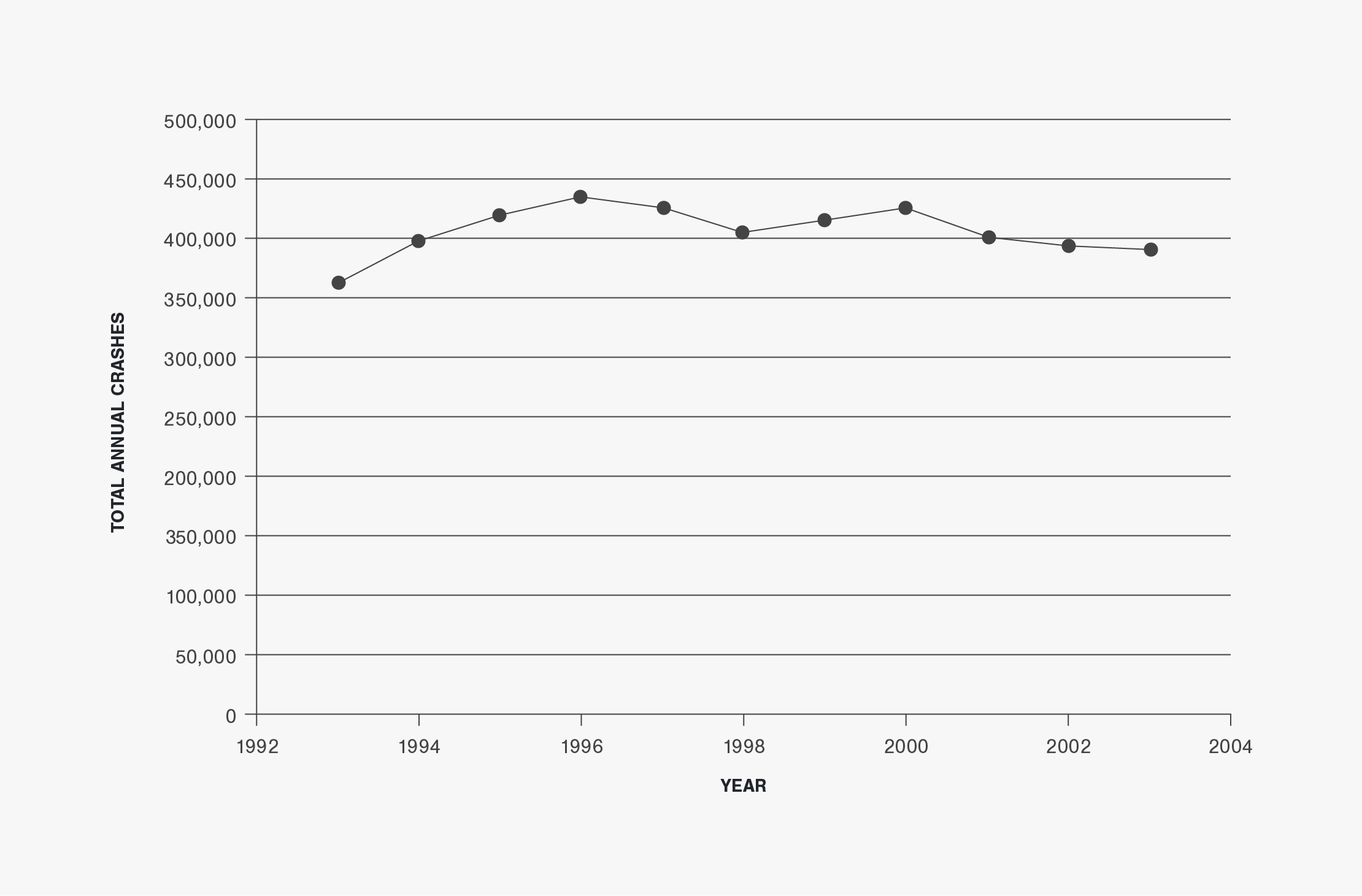 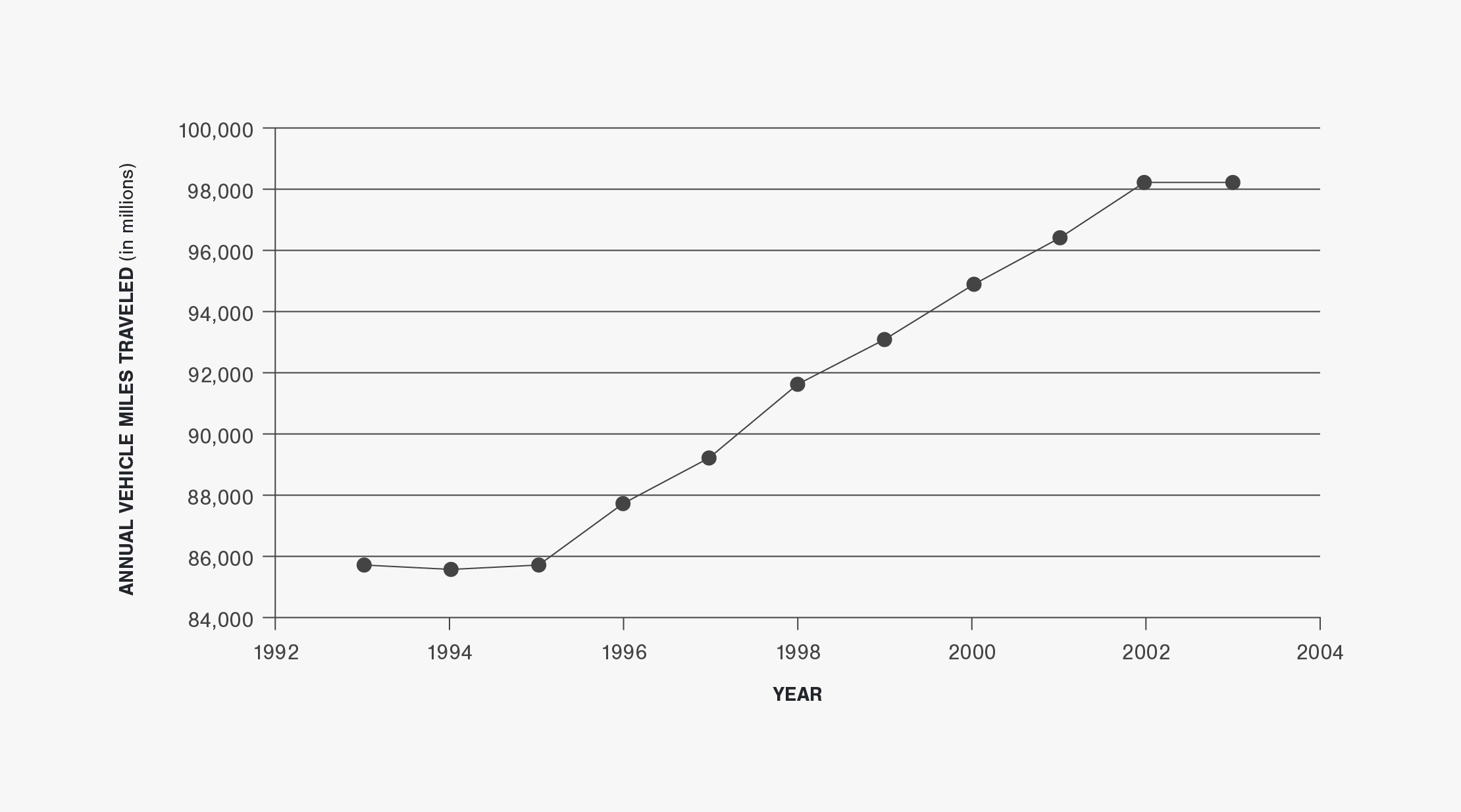 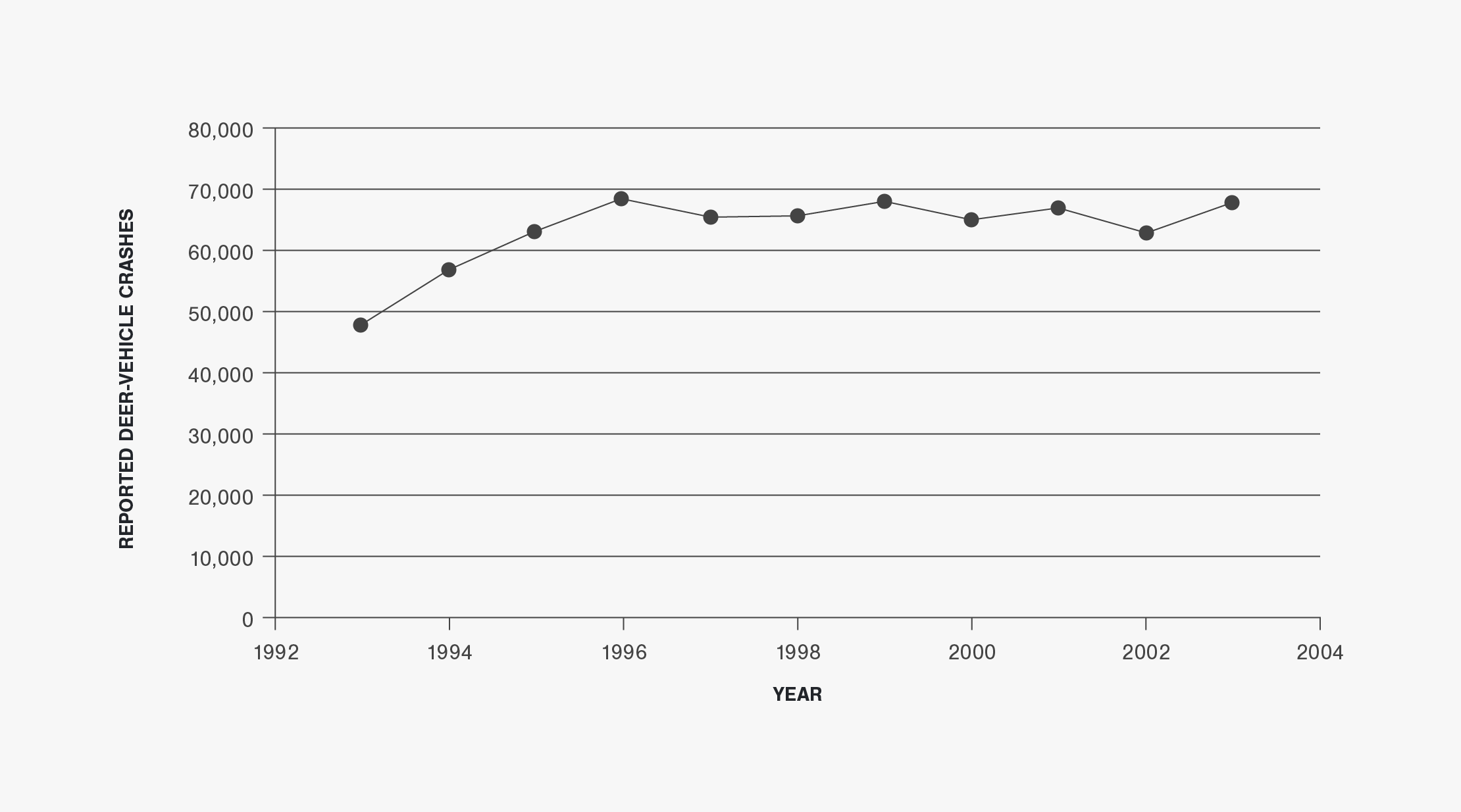 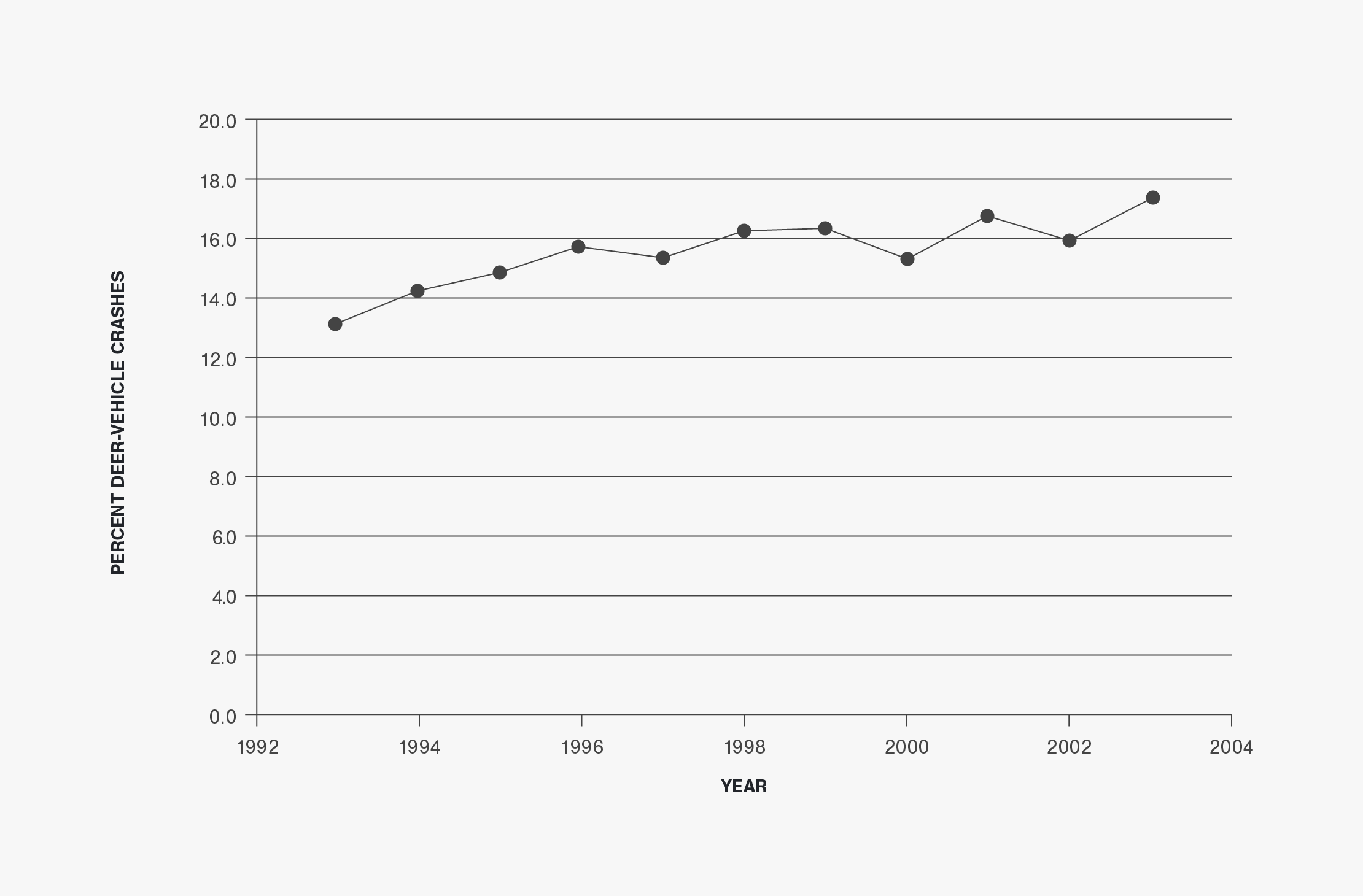 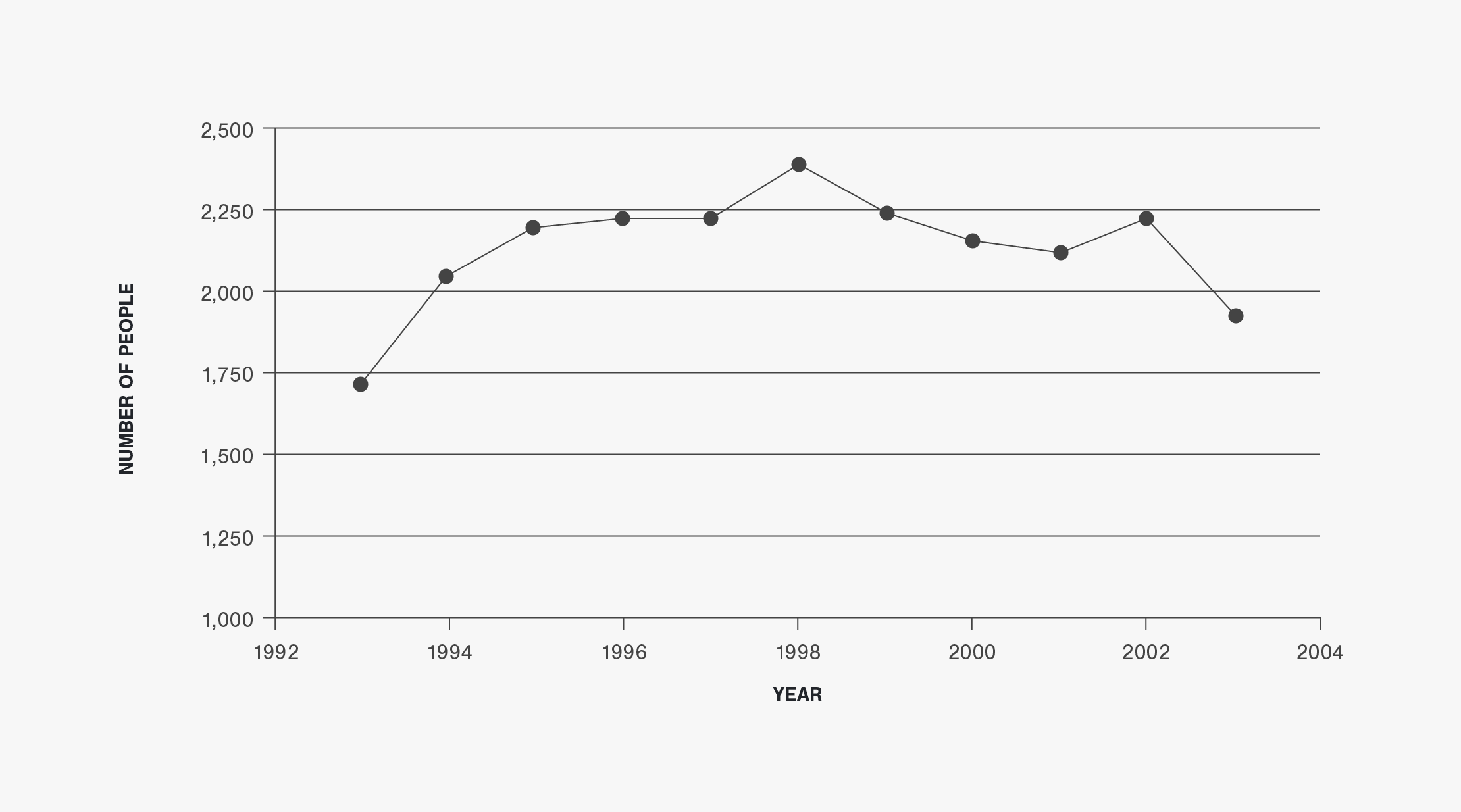 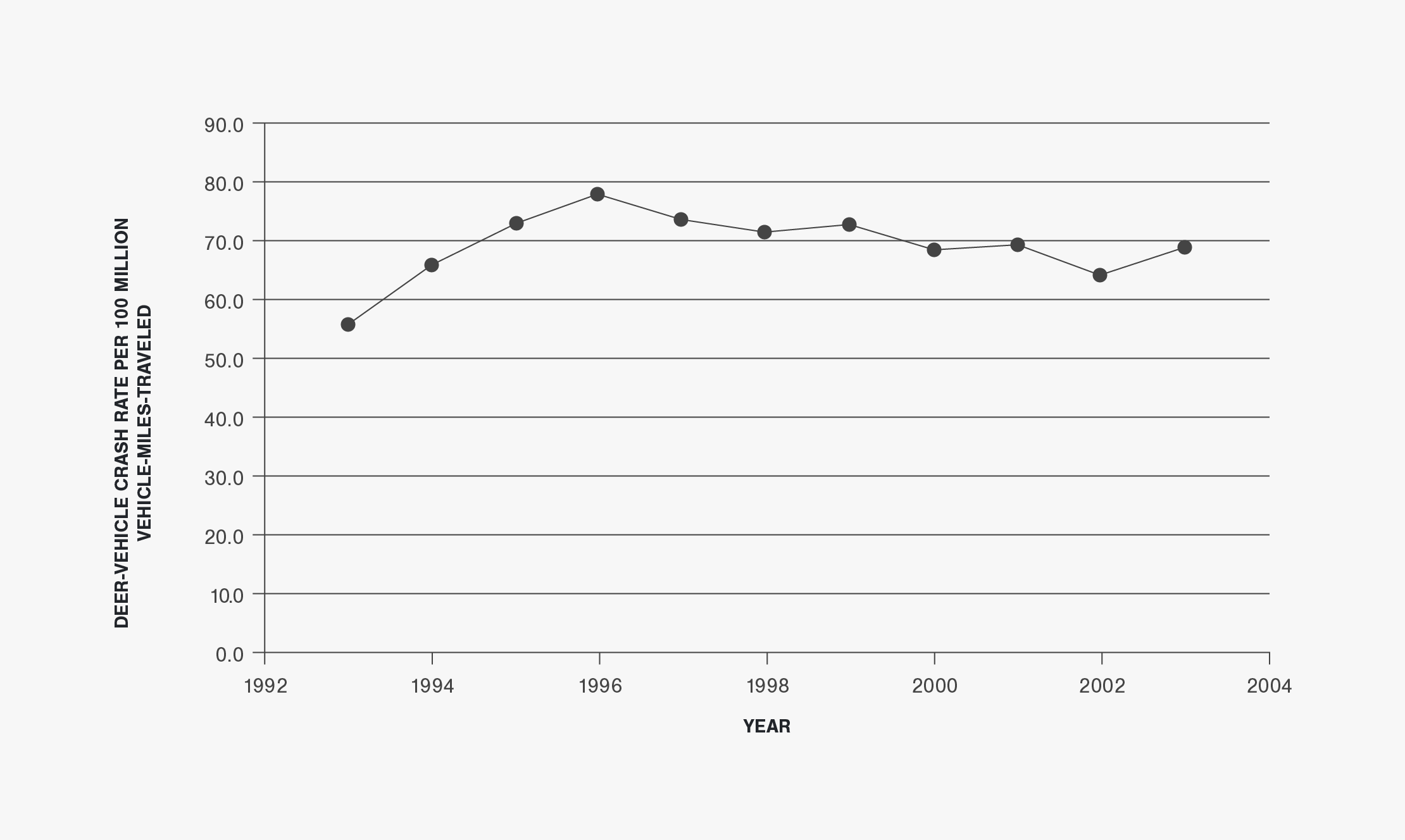 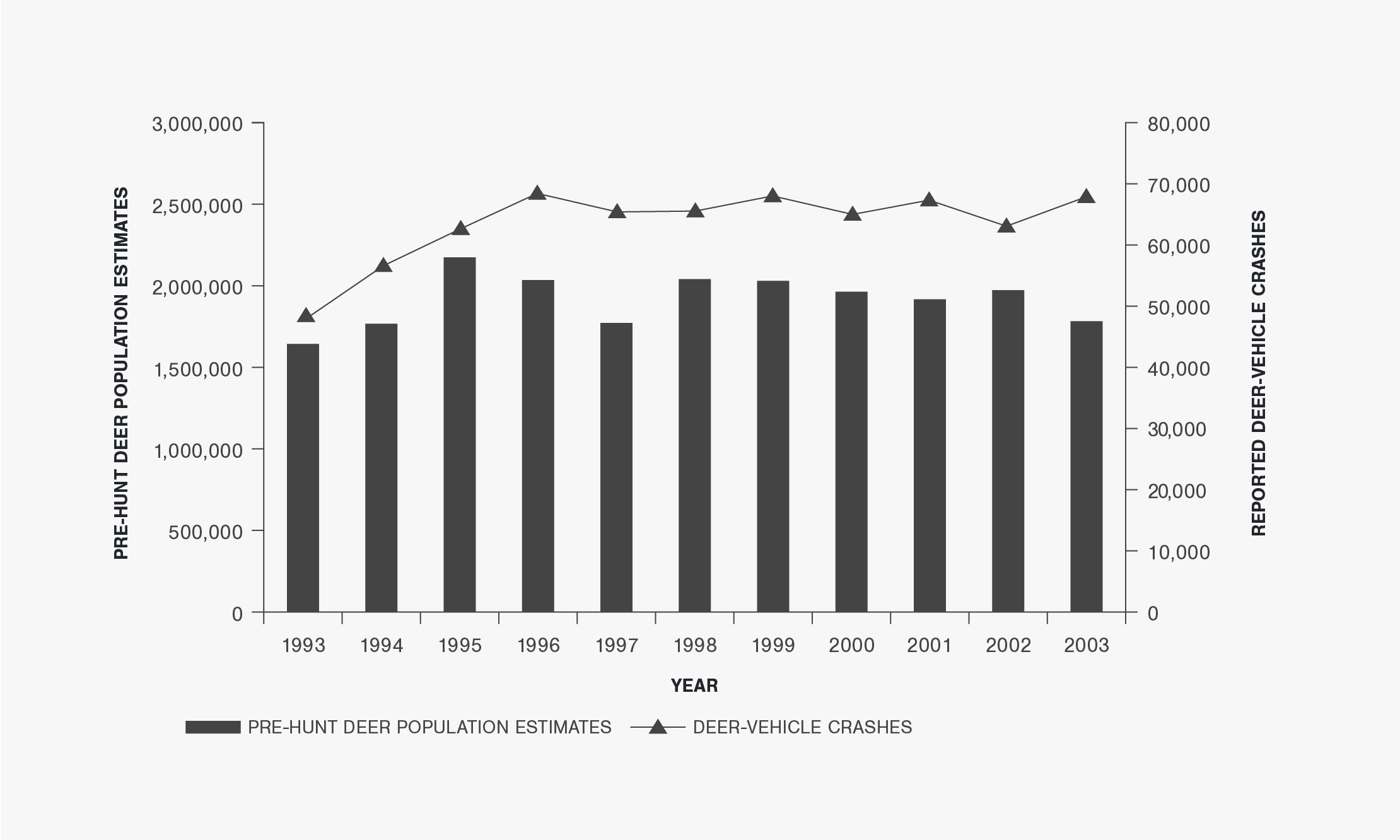 10-Year Report: This report used only a portion of the data available from Minnesota. To view all Minnesota data, including the most recent data available, please visit the Animal-Vehicle Crash Data page.

From 1993 to 2002 the average percentage of all crashes reported in Minnesota that were DVCs was approximately 5.6 percent. The annual total number of reported DVCs decreased from 1993 to 1997, but increased somewhat from that year to 2002. The total number of injuries and fatalities due to DVCs, although variable, also increased. Deer are the third most commonly hit object behind striking another vehicle and striking a fixed object in Minnesota (3). An evaluation of the Minnesota DVC-related data showed the following general patterns: 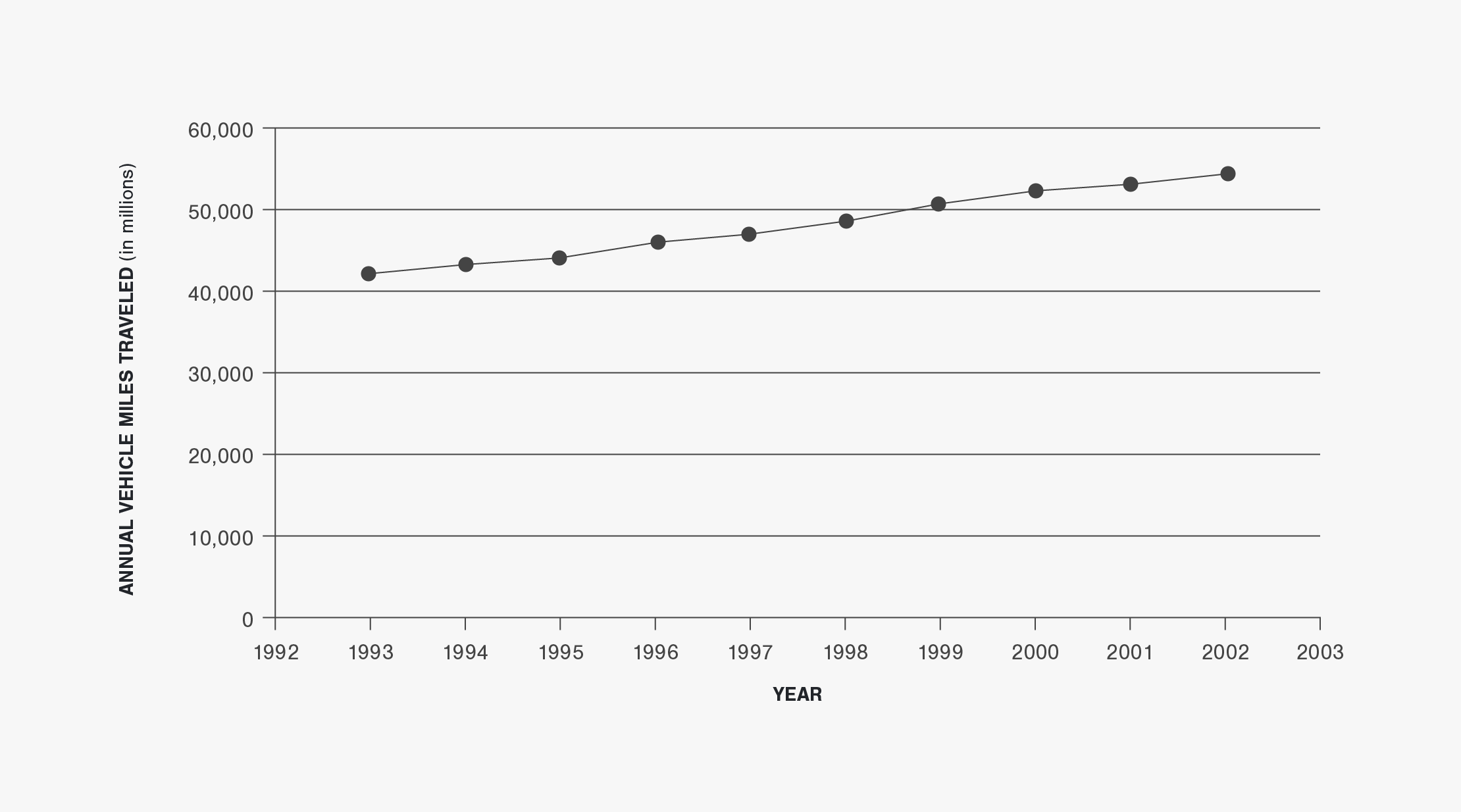 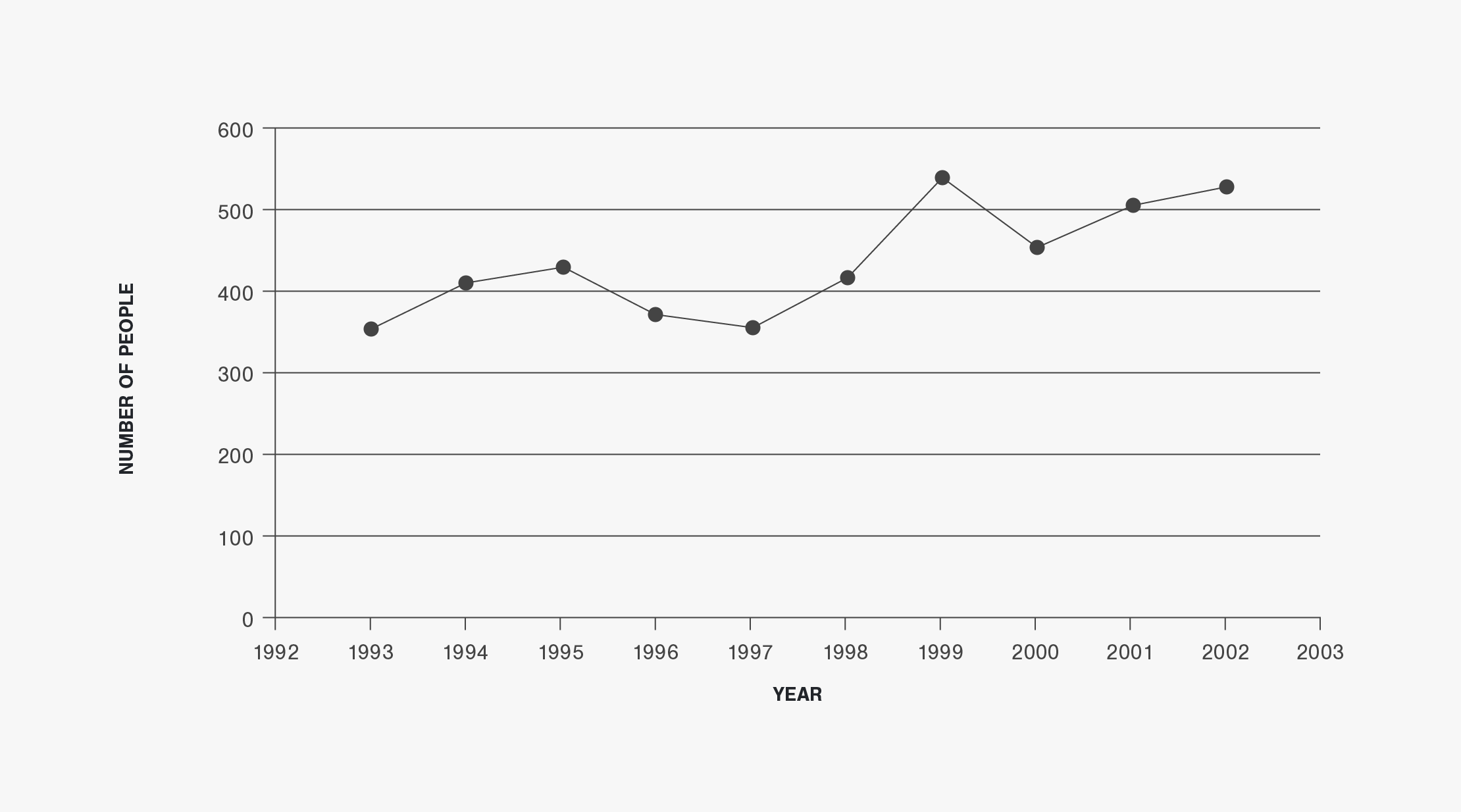 10-Year Report: This report used only a portion of the data available from Wisconsin. To view all Wisconsin data, including the most recent data available, please visit the Animal-Vehicle Crash Data page.

From 1993 to 2003 the average annual DVC percentage of all the crashes reported in Wisconsin was approximately 15.7 percent. The annual total number of reported DVCs decreased between 1995 and 1996 (possibly due in part to a change in the Wisconsin crash reporting minimum property damage threshold) and then remained relatively stable from 1996 to 2003. Deer are the third most commonly hit object behind striking another vehicle and striking a fixed object in Wisconsin (4). An evaluation of the Wisconsin DVC-related data showed the following general patterns: 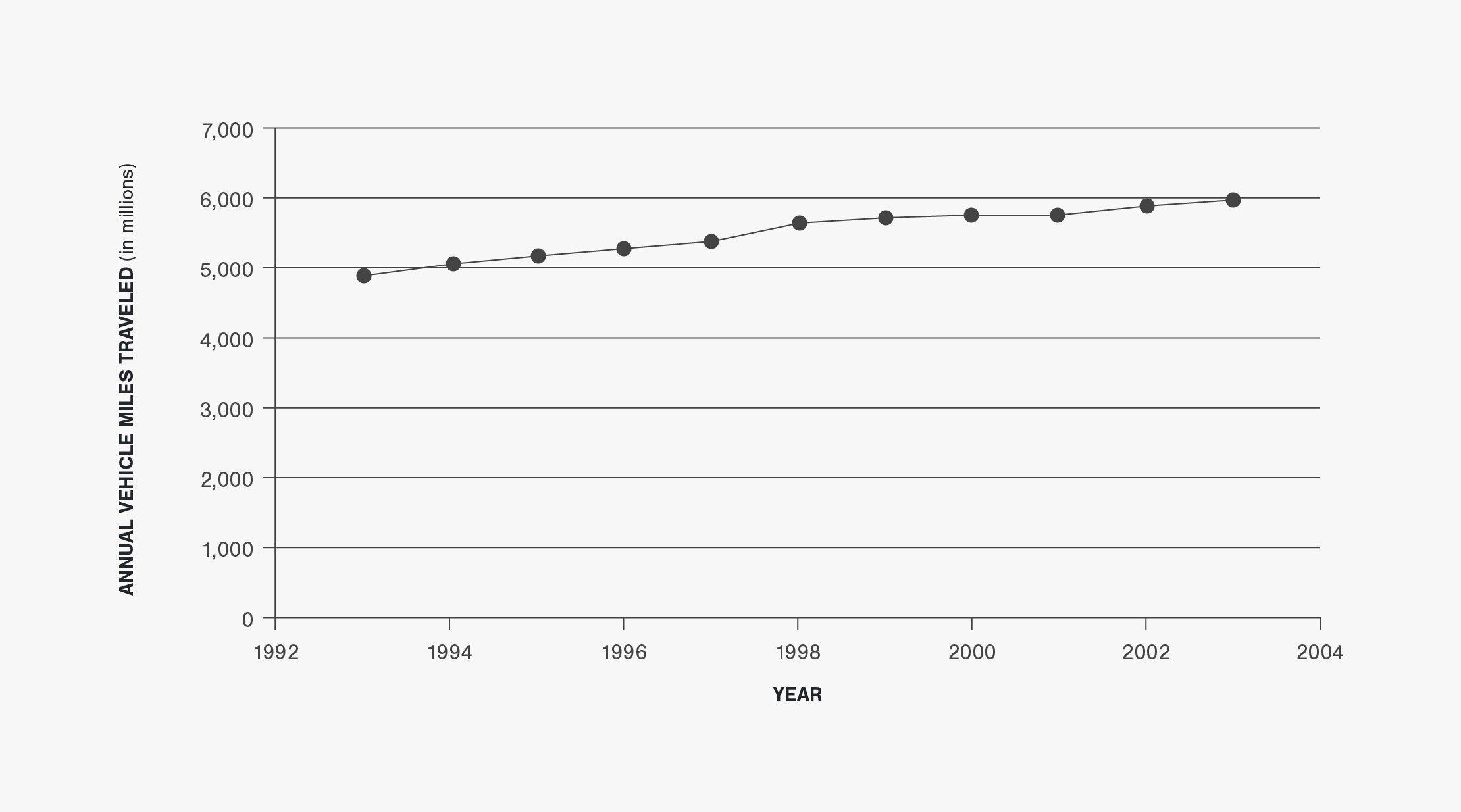 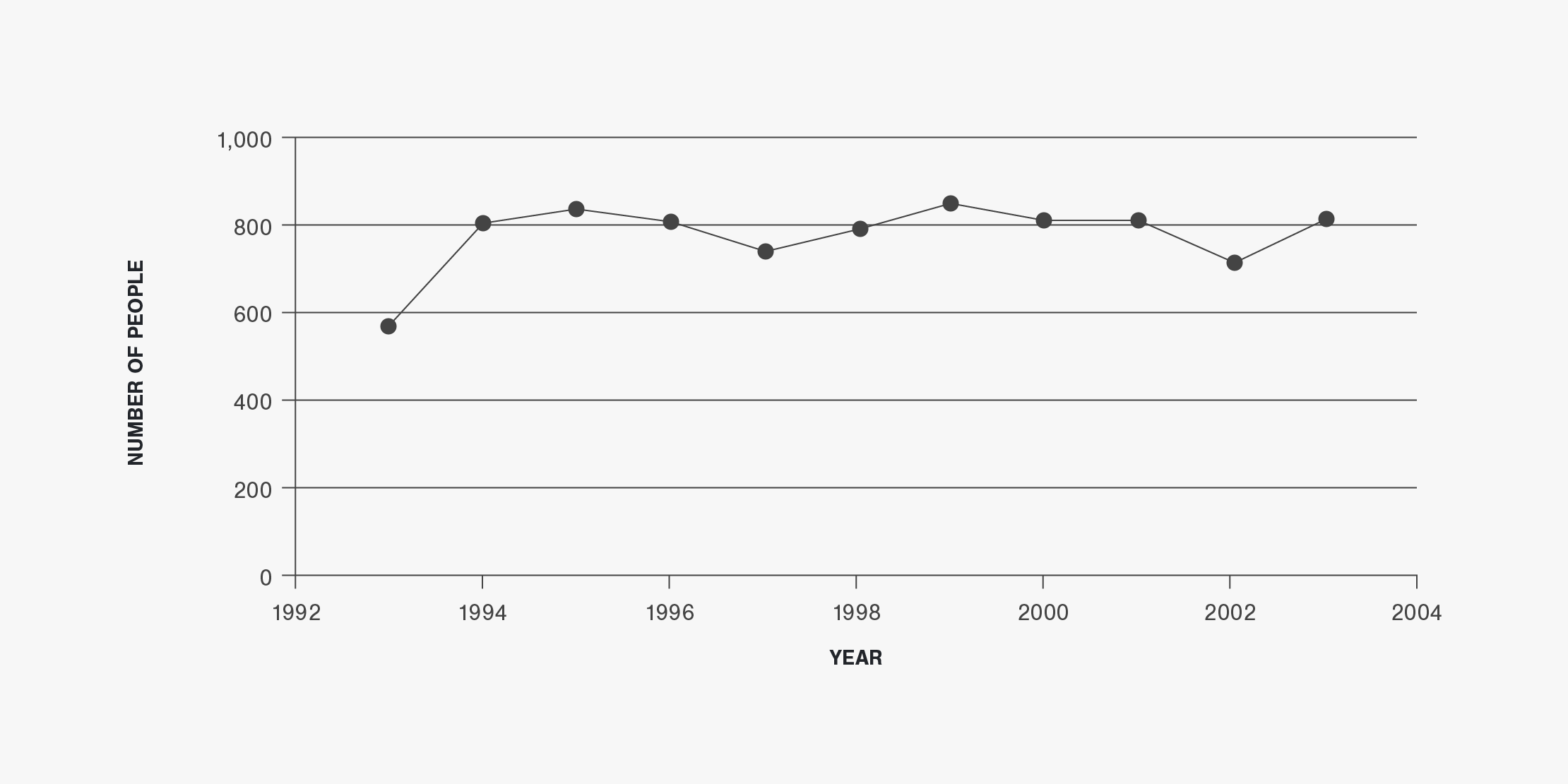 The 2002 (last year that data from all five states was available) DVC percentage (AVCs for Iowa) of all crashes reported in the Upper Midwest was approximately 10.7 percent. The annual total number of reported DVCs (AVCs for Iowa) has increased by about 17.3 percent in the Upper Midwest between 1993 and 2000. An evaluation of the DVC- or AVC-related data from Illinois, Iowa, Michigan, Minnesota, and Wisconsin showed the following general patterns: 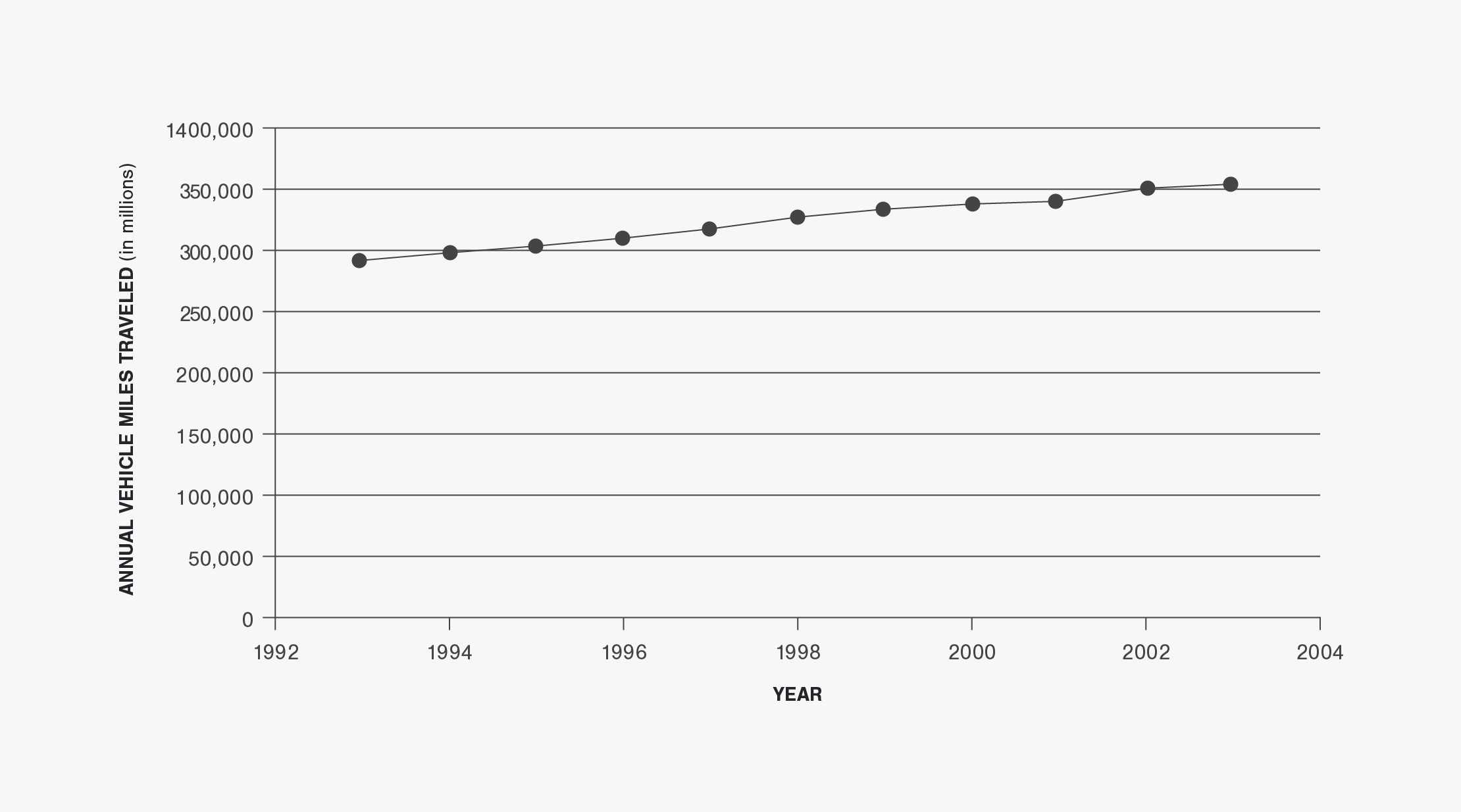